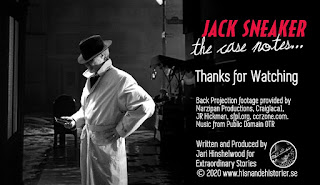 Jack Sneaker is a private investigator. Stubbornly old school, but he has at least begun recording his case notes digitally, on his phone. And he's given us access to some of his files!

In this short film put together from his filmed notes, you can follow him as he solves (more or less) an extraordinary abduction case!

The project premise was, what if one person made a film, wrote, shot, acted, edited - all on his own? Like a one-man band in the park with guitar, rattling bells and a quirky song, and nothing more? Well, had to try it.